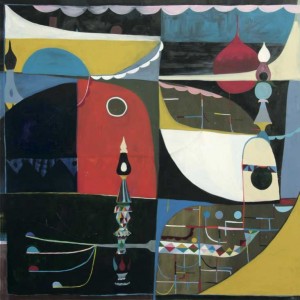 The American travel writer and novelist Paul Theroux first visited Patagonia out of boredom more than curiosity, he says, although this unpeopled part of South America with its diffuse borders stands as a metaphor for The Ultimate since its discovery in 1520. He describes the sensation he found in its vast upon his arrival: „And when, after the long trip, I arrived in Patagonia I felt I was nowhere. But the most surprising thing of all was that I was still in the world I had been travelling south for months. The landscape had a gaunt expression, but I could not deny that it had readable features and that I existed in it. This was a discovery – the look of it. I thought: Nowhere is a place.“
Before his arrival, to imagine what Patagonia might look like seemed as impossible to him as if he’d tried to “paint the smell of an onion”. This is exactly what Lawrence succeeds in with his track “In Patagonia”: It creates an earthly nowhere in the Patagonian sense. It confronts you with the vast and the tiny, the tender and the wild – and according to Theroux there is no in between there. Lawrence’s signature elegance and darkness accurately paint the picture of a harsh, yet appealing landscape.
This ability to paint with sound stands exemplary for all of his work and especially shows on his latest album titled “Films & Windows”. Named after a series of exhibitions at Dial Records’ Mathew Gallery, it continues the label’s tradition of intertwining visual arts and music that makes it so unique and its releases appealing on many different levels. Accordingly, the record cover shows a part of “Underground”, a triptych by Monika Michalko overflowing with geometrical shapes and delicate ornaments. A particularly colorful vase of hers was part of Mathew’s very first exhibition, the “Grand Opening Pt. 1”. 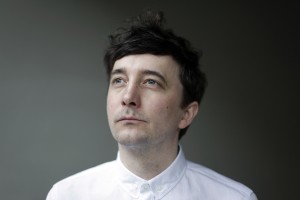 While the German artist’s paintings revolve a lot around colors, space, places and references, what it essentially radiates is a sense of other-worldliness. In a way it serves as a refuge from the things that it’s made from, just like House and Techno does. The world of Monika Michalko is an extreme one, just like the one a DJ inhabits. Because of this, beside it referencing Mathew, “Films & Windows” as a title also stands as a metaphor on Lawrence’s profession as a DJ and travel-writer-of- sorts: “All the roving and the colors, art, moments and glances you encounter this way have an influence on one’s productions”, he says, “that permanently revolve around fictive and actual events, films and views.”
It comes as no surprise that most of the album’s tracks are titled after certain places linked to personal memories or fantastic associations. Aforementioned “In Patagonia” is an example of the latter, a club track that conjures up a sentiment for traveling that is best described as mixed. At the same time the serene “Kurama” for example, a track previously released on DJ Koze’s Pampa Records, is dedicated to a much-loved mountain in Kyoto and the warm-hearted “Har Sinai” pays homage to a place in Tel Aviv that by its name is on the border of reality and fiction – and “great to drink at”. What brings together these seemingly unrelated places and phantasies are Lawrence’s clear aesthetics as well as his love and passion for all of them and the accuracy with which he carefully constructs moods and visions. After all, these are key elements that make Dial’s success just as they permit the infamous, so-called Mathew matching magic.
Bianca Heuser